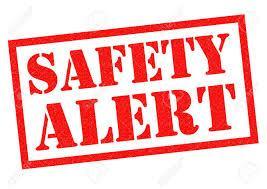 As you may be aware, yesterday (9/18/19) seven Wapato Middle School students were suspected of ingesting an unknown substance causing them to display symptoms of being under the influence.  Four were sent to the hospital as a precaution and the others were released to their families.  It has been confirmed that the students involved ingested a small tab similar to the one seen in the photos below.  Thankfully all the students who were seen by medical professionals yesterday were checked out and released to their families later yesterday afternoon. We do not have confirmation of what substance these tabs are laced with, however based on information the District has obtained the symptoms displayed by the students yesterday can often be associated with the ingestion of some type of hallucinogenic.

We want families to be aware of what these "tabs" look like so you can have conversations with your students about the dangers.  The substance on the tabs could also be transdermal, which means it could be absorbed through the skin so if you find any please do not handle them with your bare hands.

Individuals who ingest these may exhibit the following symptoms:

We ask anyone who sees or hears anything that may threaten the safety of our students & staff to say something.  Please contact your student's principal immediately.