CONGRATULATIONS: Wapato School Board Honored as "Board of the Year" 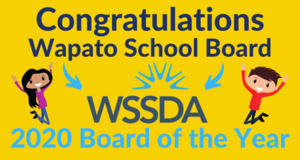 The Wapato School Board of Directors has reached the pinnacle of recognition for school boards in Washington State.  Earlier today the Washington State School Directors’ Association (WSSDA) announced that the Wapato Board has been chosen as the “2020 Board of the Year” for medium sized school districts.  Wapato School Board members include President, Maria Erickson, Vice President, Sarah Divina, Javier Vela, John Francisco and Lorenzo Alvarado.

The Wapato Board is being celebrated for applying the Washington School Board Standards to close opportunity gaps in unique ways that are tailored to the community.  During the award presentation WSSDA Director of Leadership Development, Tricia Lubach, shared how the Wapato Board has demonstrated tremendous focus on strengthening its relationship with the Yakama Nation and closing the achievement gaps of the District’s Native American students.

Lubach says, through an intentional plan and support from the Board, the District has included input from the Yakama Nation Tribal Council Liaison in its decision-making.  The District has added courses teaching the local Native American language to middle and high school students and, through a multi-year partnership, added mental health counselors from the Yakima Nation Behavioral Health Services at their schools.

Additionally, the Wapato Board sponsored a new partnership with the University of Oregon Teacher Preparation Program with an emphasis on recruiting Native American teacher candidates.  Lubach added, “Their data backs up their efforts, with the gap between Native, Hispanic and white students narrowing or being eliminated in multiple categories, including graduation rates.”

To view comments from Board President Maria Erickson about the "Board of the Year" recognition, click here.