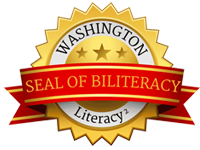 When the Wapato High School Class of 2021 graduates this Thursday evening, June 10, at 7:00p.m., four members of the class will be the first ever in the state to graduate with a Washington State Seal of Biliteracy for Native, Tribal or Indigenous language.

According to the Office of the Superintendent of Public Instruction (OSPI) the Washington State Seal of Biliteracy recognizes public high school graduates who have attained a high level of proficiency in speaking, reading, and writing in one or more world languages in addition to English.  Wapato High School Seniors Caitlyn Menick, McKayla Goudy, Bishop Eneas and Frank Canapo Jr. are receiving this honor and recognition for their proficiency of both the English language and Yakama Ichishkin language.

In order for the above mentioned students to be considered for this recognition they had to, in part, demonstrate their mastery of Ichishkin to and receive a recommendation from the Yakama Nation Tribal Council Education Committee.

A special seal will be placed on their high school diplomas and a note made in their high school transcripts recognizing their accomplishment.  In addition, the students were recognized the afternoon of June 2, 2021 by the Yakama National Tribal Council during the Wapato Public Schools’ Tribal Consultation.  They were also recognized during the Wapato High School’s Senior Awards Assembly the evening of June 2nd.