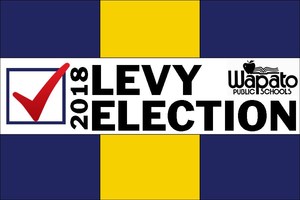 Wapato Public Schools want to thank the voters of the Wapato School District for your overwhelming support of the District's 4-Year Educational Programs & Operations Replacement Levy.  The levy is passing with a 64% YES vote.  The Wapato community has a long history of supporting Wapato students and the community demonstrated  its support once again by passing the replacement levy.  The District wants to especially thank the members of the Wapato Citizens for Better Schools Committee led by its Co-Chairs JoAnne Estes and Tony Hernandez.  Thank you for your tireless efforts to promote the levy proposal.